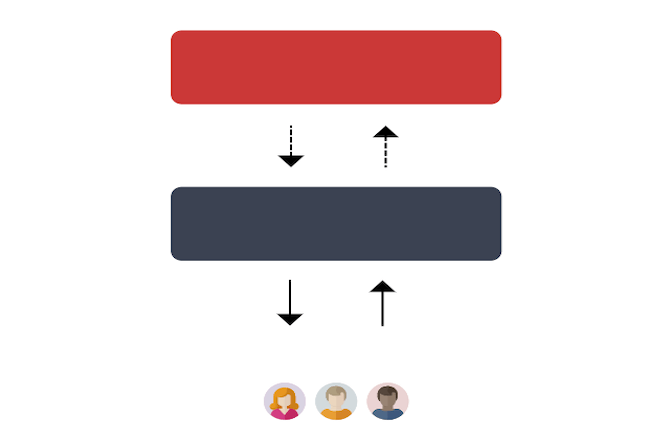 Want to have an npm proxy between you and the public registry? Want to make sure all teams are using on the same package versions? Want to delegate the responsibility of making releases?

Using a Bytesafe private registry with Upstreams make this possible!

This post aims to guide you through the concept of upstreams. Read on for insight into:

Upstreams are linked registries that are used both as a destination and source for packages in your private registries.

Package versions can be downloaded (“pulled”) from an upstream to a registry (either manually or when running npm install). Packages can also be published (“pushed”) from a Bytesafe registry up to an upstream.

In the simplest use-case, Bytesafe offers private registries to manage packages for internal use within an organization.

If a registry is configured without any upstreams:

This is the default scenario when a new empty Bytesafe registry is created by the user.

For some teams this case may be the preferred option, as they use the registry only for internal packages. But most teams also depend on package versions available in the public registry.

Let’s look at what adding the public npm registry as a upstream looks like.

Add npmjs as upstream to the registry

Package versions pulled by a developer will also be downloaded and stored in the Bytesafe registry, in essence creating a npm proxy (with the security benefits that entails).

If the public npm upstream is configured with a valid npm token, package versions can also be pushed from the bytesafe registry to the public registry.

Benefits of running a private registry with an npmjs upstream

The main difference between using npm and bytesafe commands lies in the scenario where you use them, where npm is typically used by developers interacting with the registry from a project workspace and bytesafe is used for moving versions between registries.

Both commands push package versions to a target (upstream):

Both commands retrieve packages from a source (upstream):

Use the appropriate command for the scenario npm commands for pushing or pulling directly from a developer’s project workspace. bytesafe commands when managing package versions in registries and upstreams

Installing packages from a registry with upstreams

Installing a package with npm install is a three-step process. First a list of all available versions for the package is downloaded, then a specific version is chosen from the list, and last the actual contents are downloaded.

When a bytesafe registry have one or more upstreams, npm will receive all available versions of the package, including the versions available in the upstream registries.

When the contents of a specific version is then downloaded, bytesafe will pull the contents from an upstream if needed.

The upstreams are searched in order, which can be changed in the registry settings in Bytesafe.

Bytesafe allows a lot flexibility to organize registries and upstreams to fit your specific workflows.

Use the following example configurations as an inspiration for whats possible.

For certain organizations it may not be ideal to have a setup where a developer-facing Bytesafe registry is directly connected to the public registry.

In this case adding one or more layers of registries between developer teams and the public registry may be beneficial.

Each private registry is only configured with the layer above it as an upstream.

This way of structuring the flow of packages between teams and the outside is especially powerful in combination with policies and plugins.

Benefits of configuring a chain of registries:

So what happens when a developer want to pull new package versions?

As pulls using Bytesafe are recursive, the pull request action will be passed from registry to registry until the package is found (or it fails).

So although the developers registry is only configured with another private registry as a upstream, they are able to continue working using third party packages.

Use Case: Registry with multiple upstreams

What if your team or organization want to use packages, both third party and internal, from different sources without setting up a chain of registries?

Bytesafe supports registries configured with multiple upstreams where the priority of the upstreams decides the order in which they are queried for package versions.

If a team uses a Bytesafe registry that has two upstreams configured with the following priority:

When a developer installs a package from the private team registry:

This is can be very useful if the partner registry contains a patched version of a public package for example!

The concept of upstreams introduce potential for controlling the flow of packages between registries that your organization control and the public npm registry. By understanding upstreams you can already setup a flow where only approved packages are available for downstream registries or control who is allowed to publish to public npm.

Continue reading our series on Using Bytesafe, to see how Plugins & Policies can secure your code supply chain!

By taking advantage of Upstreams and configuring Bytesafe to fit your organizations workflow you can: