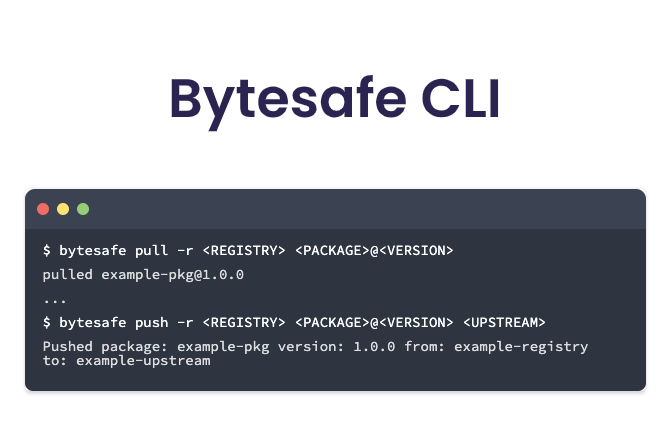 For the users that prefer command line, Bytesafe offers the Bytesafe CLI for MacOS, Linux and Windows. The CLI supports actions for managing your private registries and packages. Giving you complete control over what package versions are available in each registry!

Most Bytesafe actions can be performed either from the CLI or the web app.

For this post I will cover bytesafe push and bytesafe pull of package versions in more detail.

If you instead want to know how to configure and use the npm client with Bytesafe, please read Bytesafe basics.

The authentication token required for login to Bytesafe (using the CLI) can be found on the CLI page in Bytesafe.

bytesafe pull pulls package versions from an upstream into a registry and is used for managing registries and moving packages between registries.

When using pull, you always express which registry you want to pull the package into (using the -r or –registry followed by registry name).

Unlike when using npm install to install a package into a project workspace, package dependencies is not included by default when using bytesafe pull to pull package versions into a registry.

By not including dependencies automatically, Bytesafe ensure you (or your DevSecOps team) control exactly what package versions are included in the registry.

For the sake of example lets assume the following:

First, we check what packages are stored in the registry before our action, using bytesafe list

No packages are listed. Our example registry is empty.

If you want to be in control of what upstream source is used when pulling package versions, you can specify the upstream source as part of the command. This is for instance beneficial when an upstream registry contains a patched version of a package.

Note: Package version needs to be explicitly specified when pulling from a specified upstream

When using push, you always express the source registry that contains the package versions you want to push as well as the upstream target registry.

Source registry is specified using -r or –registry followed by registry name and target registry by using the upstream name.

Specifying package version is optional and as such if a specific version is excluded the version tagged latest will be pushed.

Let’s assume we want to push the same example package version to the public npm registry (which is configured as upstream with name: npmjs). Below example assumes upstream is configured with a maintainer access token (see potential errors below).

$ # Version can be omitted to push latest version

Bytesafe has now pushed the package version to the specified upstream!

Tip: Enable your organization to manage Javascript packages more securely by setting up a Bytesafe registry as an npm proxy!

Use a Bytesafe private npm registry as the target for your npm publish from a project workspace and use bytesafe push to push a package to public npm registry as an upstream.

The flexibilty with how you can configure upstreams for your Bytesafe registries enable a powerful way of securely managing your packages and versions. And the results of pushing and pulling are dependent on your configuration.

If no upstreams are configured for a registry or your action would fail for any other reason, an error message will be available in your terminal. Error messages are recursive, so for configurations with multiple upstreams (direct or indirect) you will receive appropriate guidance.

For more information and details on upstream configurations when using push and pull commands, see the post Using Bytesafe - Upstreams.

Don’t be the weakest link in your software supply chain

A great time to consider moving from npm Enterprise to Bytesafe