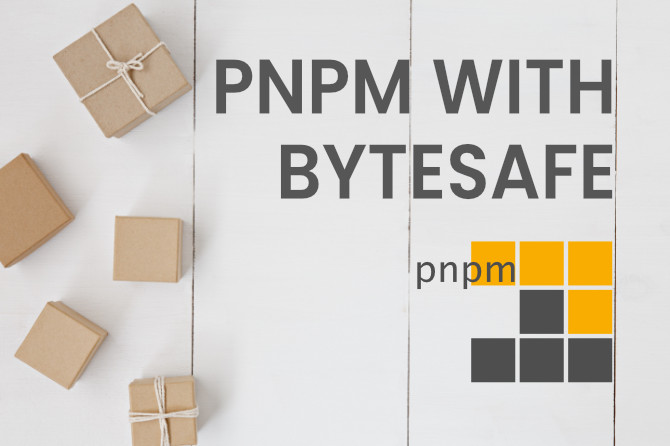 pnpm is a package manager for the JavaScript ecosystem that seems to be the only real alternative package manager besides the big two, npm and yarn. Its main unique feature is an efficient node_modules structure that prevents multiple copies of the same dependency and therefore saves you disk space.

One of the goals of Bytesafe has always been to allow our users to continue using their regular tools when working with JavaScript packages in private npm registries. The primary focus for this has been npm followed by yarn.

But users that have adopted pnpm really seem to like it and articles on the web speak warmly about it. And we want our users to be able to keep using the tools of their choice.

So how does pnpm actually work with Bytesafe? Let’s find out.

Sidenote: When we first released Bytesafe, it did not work that well with pnpm, due to a bug where some auth headers were missing from the pnpm requests. This was reported by one of our users and fixed by the pnpm maintainers (so make sure to use pnpm version ^5.1.3). Kudos for a quick fix from the pnpm team!

Important! Just like with yarn, it is important that you follow the steps below when using pnpm. Make sure to double check the steps if you get any errors as it’s easy to miss for example the trailing / when pointing out your registry.

npm was first, is the most widely used and over time has been adapted to cover most scenarios. yarn wanted to be faster and enable reproducible builds. So what’s the motivation behind pnpm? According to the pnpm website, it is speed, efficient disk use, and built-in support for monorepos.

In addition pnpm handles transitive dependencies more strictly. pnpm only stores direct dependencies (that are noted in package.json as dependencies) in the root of the node_modules folder, in contrast to npm and yarn who creates a flat structure with all modules stored in the root.

Is pnpm a popular package manager?

So what about usage? Although only part of the story and doesn’t say anything about the usefulness, it’s interesting to see an approximation of how many are using each package manager.

It is nowhere clear from the picture above, but pnpm seem to have around 50k weekly downloads. Compare this with npm (1.9 million-ish) and yarn (1.4 million-ish) and you get a sense that the big two are much more widespread for the time being.

Reflection: Although pnpm’s use is not as widespread as npm or yarn, our assumption is that there may be an overrepresentation and overlap of users between Bytesafe and pnpm. Most likely due to early adopters of Bytesafe to some extent overlaps with early adopters of pnpm (as both groups have more demanding requirements on package management)

The pnpm client uses the same config file as npm (.npmrc). Setting config items and login to Bytesafe can be performed either using npm or pnpm. You also need to be aware of some quirks to make pnpm work as intended with Bytesafe.

Reminder: you need to use pnpm version 5.1.3 or later for the authentication to work as intended.

We recommended the following settings when using pnpm with Bytesafe:

$ # set default registry in ~/.npmrc. Note the trailing slash after the registry URL.

Note: pnpm supports the use of the --registry flag instead of fetching the information from the config file. From testing, you get more reliable results from setting the default registry, as use of the registry flag is currently dependent on the order of when the flag is passed to the client (e.g. pnpm --registry [registry] add works fine, but using pnpm publish command requires the registry flag to follow after publish)

You can find login credentials in the Bytesafe web console for each registry.

Note: As with setting the default registry, be aware pnpm requires adding a trailing slash after the registry url as the client resolves registry URLs differently than npm.

$ # Using --registry flag to point to your bytesafe registry instead.

To some extent adding, installing and publishing packages works as expected when using the pnpm for regular users of npm (with the obvious exception to how node_modules are handled). Again, for users that prefer using --registry flag, keep in mind to add the trailing / and pass the flag after the specific pnpm command.

$ # Adding and installing a single module to a project

$ # Installing all modules for a project from package.json

$ # Publishing from a workspace to the Bytesafe registry

It’s always interesting to look into tooling that offers interesting and new features. At Bytesafe, we are committed to make your workflow easier and want to make sure our service is as compatible as possible with the tooling you regularly use.

Don’t forget to send feedback or report any issue you encounter to our top-notch Bytesafe Support so our team of engineers can resolve them.